Why Do You Compete in Sports?

I want call attention to and break free from the inequalities that exist in the language and images used to represent competitive female athletes, and I’d like your help.

How You Can Help: Why Do You Compete in Sports?

I invite any person who identifies as female of any age who has competed in at least one sport or athletic competition in her lifetime to answer this question: Why do you compete in sports?

If you would like to be a part of this project and help change the way female athletes are represented, please send me the following information:

I will compile your photos with your quotes to create a video, which I will share with my adult education doctoral program and publish to YouTube and my web site.

Feel free to share this project with other females and encourage them to participate.

Please send all responses to thighflashers@gmail.com by April 15, 2015.

Thank you for your help! 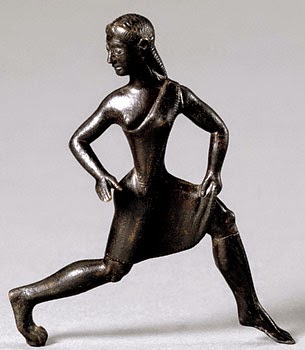 In ancient Sparta, the government required girls to participate in physical education and athletic competitions, just like the boys. Even mature and pregnant Spartan women were encouraged to exercise. As much as modern feminists, like me, would like to think Spartan females’ participation in sports was an early instance gender equality, that’s not really the case.

The freeborn Spartan woman’s duty was to bear children and produce healthy sons for the Spartan army. Sparta’s physical education agenda for women was purely eugenic: women were valued only for their roles as child-bearers, not as athletes.

Other ancient Greek city-states found Spartan girls’ athleticism shocking, especially because girls, like the boys, wore very little clothing, or none at all, when they exercised. Their nudity was not shameful within the Spartan community; instead, it encouraged them to be modest and fit. Non-Spartan Greeks, however, denounced Spartan females, calling them unchaste, indecorous thigh flashers.

Female athletes today still face some of the same discrimination as they did in ancient Sparta: they’re more valued for their roles as mothers than as athletes; they’re inappropriately sexualized; and they’re referred to in unequal and condescending terms.

I titled this project and blog Thigh Flashers to call attention to the inequalities that still exist in the language and images we use to discuss competitive female athletes. One of my goals of this project is to help female athletes tell their sports stories and discuss their athletic bodies in their own words.
Posted by Anne Greenawalt at 7:55 AM