How Running a Marathon Nearly Broke My Heart (and My Ankle, Too)

The morning after my first marathon, I felt like I had a dagger lodged and twisted in each of my Achilles tendons. I walked in from the parking lot at work by picking up one foot at a time without bending my ankle. I entered the stairwell, looked at the flight of stairs, said fuck it, and took the elevator.

The next day didn’t feel any better. I sat at my desk to eat lunch so I didn’t have to walk anywhere. I took a few bites of the homemade chili my mom had left in my refrigerator. As I ate, I thought about my Achilles tendons and wondered if I had ruptured them, maybe a partial tear. I had felt a slight pop in the left one within the last three miles of the marathon, but I kept running on it. I took the last bite of chili and felt queasy, really nauseous, and wondered if I’d have to go to the bathroom to throw up. What had my mom put in this chili?

I think that was the last thought I had before I felt like I was stuck in a dream and couldn’t open my eyes. I wondered where I was. I blinked open my eyes to find my head down on my desk. And then I felt dizzy again and darkness creeped in like tar. I fought it, but down I went. Again, I fought to come out of it like waking from a persistent dream. I wondered if any co-workers saw me and though I was taking a nap. I couldn’t stop shaking. I sat there until I was sure I wouldn’t pass out again.

With the help of a friend, I got to the on-site clinic, where they checked my vitals, gave me more food, and kept wrapping blankets around me. My blood sugar was low, they said, but not low enough to cause me to pass out while sitting down. So...they called emergency services, who carried me out of my workplace on a stretcher and chauffeured me to the hospital where I waited for hours to find out that nothing was wrong with me (and Mom's chili hadn't poisoned me). 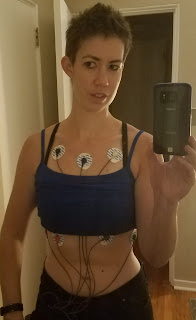 The ER doctor was concerned about an underlying heart problem. She wanted to keep my overnight for observation but all I wanted to do was go home. She agreed to release me if I promised to get a portable heart monitor the next day. I agreed.

Due to a faulty healthcare system, it took five weeks until I got my portable heart monitor. In the meantime, I could have died had I actually had a heart problem. But my heart was normal, with a low resting heart rate of 42.

Within those five weeks, I saw a doctor about my Achilles, got an ankle brace and an MRI on the left one. At first, he thought I had a partial rupture and told me to walk with crutches, which I didn’t do (stubborn!). But it turned out to just be a bad case of tendonitis with severe bone bruising.

After training for a marathon, not being allowed to work out for over five weeks was pretty brutal. I completed a lot of upper body weight exercises, but that wasn’t enough. I was so thankful when the ankle brace came off and I was at least allowed to swim and cycle again.

I just finished three weeks of physical therapy with a clean bill of health. I’ve been jogging on the treadmill for 30 or so minutes at a time at 1 minute walk and 4 minutes running. So far I’ve had no pain!

I’m ready to build up my miles again while continuing to cross train. I have some big plans for 2017...
Posted by Anne Greenawalt at 6:05 PM