On the Rocks 20-Mile Trail Race

I loved racing the 15K at On the Rocks last year in the 100+ degree heat so much that I wanted to run it again.

This year, like last year, had a loop course and participants had the option of racing one, two, or three laps. Last year the lap was a 15K; this year it was a completely different course and a slightly longer lap at 10 miles.

I would have loved to race three laps to complete my first 50K, but after spending most of my spring training for swimming and rehabbing a knee after a running injury, I knew I wasn’t in shape to do that yet. I debated for weeks between signing up for the 10-mile or the 20-mile event. I knew could actually race the 10 miles, but 20 miles would be a little long with my recent lack of running. If I did the 20-mile race, I’d have to go into it know it wouldn’t be a “race” but a supported training run.

If you know me, you know I love a challenge, so I signed up for the 20-mile run on the morning of the event. I knew there would be an aid station every three miles, so I decided not to run with a hydration pack. I had never relied so heavily on aid stations before.

And although I told myself it was a training run, I got to the starting line and felt all of the nervous/excited flutter of a race in my gut. So I took it out like it was a race. I mean, I tried not to take it out too fast, and I definitely could have gone faster in the first 10 miles if I knew I was stopping after one loop. But it was still probably too fast given that I had another 10 miles to go and I had barely been running 20 miles in a week let alone in one morning.

My 10 mile split—1:52—was about two minutes faster than my 15K time at this event last year! I saw my boyfriend after the first loop and he helped me get through the aid station. Said I looked strong. It was hot, but not as hot as last year. Humid, but bearable. My clothes were so drenched I could wring them out.

But it quickly went downhill from there, and I don’t mean literally downhill. I was tired after 10 miles, but my body felt OK. As I neared 11.5 miles, my body started to rebel. I felt the tightness in my hips that slowly crept down my thighs. The calluses on the sides of my big toes started to pulse. My skin was salty and I knew I needed to replenish, but the aid stations mostly had sugary foods.

The 10 mile race started a few minutes after I made my first loop, so the faster runners in that event kept catching up and passing me; even though I knew they were in a different race, it was difficult mentally to watch so many people pass me.

I got some salty potato chips around 13 miles and felt OK for the next mile and a half, then I felt tired and sore again. I slowed my pace but kept going. Hiked fast uphill and ran when I could. At the next aid station, around 15.5 miles, I grabbed more to eat and drink. The volunteers told me they thought I was the lead female runner for the 20-mile race. I knew some women had passed me, but they must have been in the 10-miler.

Again, I felt OK for a mile and a half after that aid station but then plummeted again quickly after that. I had to walk more than I wanted, even on easier terrain, just because I was so tired. My calves started to cramp up and if I ran on them, it felt like they could move into a full-blown charley horse. My watch hadn’t been fully charged, so it stopped giving me my pace and mile splits, so I didn’t know how far I was from the next aid station. It felt like it was taking forever. But I did eventually make it to the aid station where I refueled, re-hydrated, and got some ice for my wrists and neck. I needed a break, so I spent a lot of time there, watched more 10-milers pass me, but I know I needed to pause there for as long as I did. As I left the aid station, the volunteers told me I had three miles to go.

The next mile and a half felt OK, but again I crashed. And the last two miles of the loop were the hardest because they were mostly uphill. I felt slow and discouraged. But I reminded myself why I was there: it was a training run. I wanted to do the event because I wanted to spend a few hours roaming around in the woods, which is exactly what I was doing, even if I was just walking slowly. So that took some pressure off. I’m not sure I could say I enjoyed the last two miles, but I knew I would make it to the end.

I knew I was under-prepared for 20 miles, but I was pleased with myself for finishing. I learned a lot of useful things that I can use in future long training runs or races, such as carry salty food or salt tablets and don’t be afraid to walk when needed. I got an idea of what my body will feel like and what I can push through for the next time. 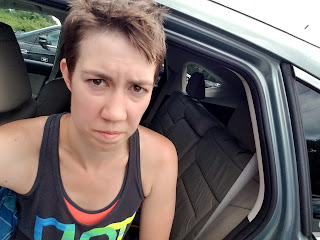 I posted on facebook that I felt like I wanted to die: I had a hard time catching my breath even though I had walked most of the last two miles. Legs hurt. Hungry. Tired. Tender feet. All of those typical running ailments. But I gave myself time to rest, ate some pizza and chocolate chip cookies, and I felt better—but not recovered.

I was the top female in the 20-mile race, and got 4th place overall, which is more because of the low number of participants (21 total finishers—there were more but some dropped out after one loop) than my speed. But still. Not bad for my longest-ever trail race.
Posted by Anne Greenawalt at 7:00 AM