I was privileged to be invited to run on the Fleet Feet Mechanicsburg’s Ragnar PA Relay Team on June 2 – 3, 2017.

There are many sources through which you can get the logistical information about Ragnar Relays and how they’re set up, so I’m going to skip that here and give you my insights about this event.

I call it an “event” because, although it was a race, I never felt like we were in a competition. It was a goal-oriented team task in which we had to safely run from one point to another while driving large decorated vans, not sleeping, and following an entire manual of event rules and regulations.

And although getting “kills,” a.k.a. passing people while we were running, was a fun way to keep ourselves motivated, it was much more about the camaraderie. I loved the upbeat, positive attitudes of every member on our team, our determination to work together to complete our journey, and the unwavering support we gave each other. 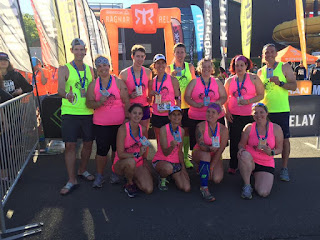 We had a 12-person relay, so we each ran three legs of varying distances and elevations. My three legs were 6.3, 6.5, and 7.1 miles and pretty hilly. I was just coming off a knee injury in which I spent four weeks in physical therapy and who knows how much money rehabbing it, so I had not been running for probably two months, then I trained for two weeks, then ran in this event.

So I was worried that a) I wouldn’t be in good enough shape to complete my legs at the speed I wanted to complete them, and b) that I would reinjure my knee. I realized early on that no one cared how fast I ran—just that I ran, had a good time, and supported the rest of the team. Happily I did just that and did not reinjure my knee :)

I ran my second leg around 2:30 a.m. in the dark wearing a mandatory headlamp and reflective vest and blinking light on country roads with no lights except the occasional Ragnar van headlights. I did not see another runner for about 4.5 miles of that 6.5 mile leg. This wasn’t as fast as my first leg, but it was my favorite to run and made me want to do more night running—though preferably on trails.
My third leg, which I ran around 3 p.m. the next afternoon after getting maybe an hour of light sleep in the past 32 hours, was the hilliest and slowest. I had a hard time breathing during the leg and immediately after—possibly had an allergic reaction to something in the air because my eyes were burning so badly that I occasionally couldn’t open them—and I thought about asking a teammate to sub in for me, but I didn’t. I was slower than I hoped, but and I was able to finish it on my own. 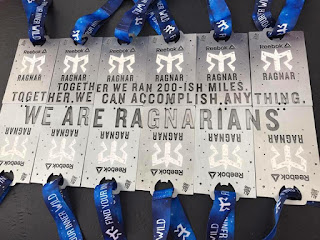 I have not looked at roads the same since this event. Now when I’m driving in my car I think, “I wonder what it would be like to run this. Maybe I could run this route.” Every road becomes a practice course. I consider commute running—running not just for the joy of it or the exercise, but to get to places, like the gym, the post office, the ice cream shop.