This summer, I ran a 20-mile trail race in mid-July, another 20-miler in early August, and about 15 miles as part of a Ragnar Trail WV relay team in mid-August.

During my first 20-miler, I wanted to cry for nearly the entire back half of the race. I didn't feel great during the first half for no particular reason—I was well-fueled, well-hydrated, though maybe not well-rested. I just felt, I don't know, not good, not powerful, not fast. In the last five miles, I got so tired that I tripped and fell about five times, often over nothing but my own two feet. I did finish, only cried a little bit out of relief that it was over, and felt recovered within a few days. But the experience left me feeling like I didn't want to run any trail races again. Why do I need to compete? I wondered. I can just go out and hike/run trails on my own.

But I had already signed up for another race, a 50K with two drop-out points: one at 17 miles and another at 23 miles. When I signed up for the race, I wanted to try for 50K, but I knew a few weeks before that I wasn't properly trained or physically prepared to take on that many miles. So I planned to hike/run until the 24 mile drop-out point. 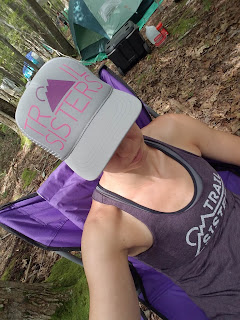 After getting to the 2nd aid station about 13 miles in, I thought nope. I'm done. I anticipated a difficult mountain trail, but this was way more than I bargained for, certainly way more than my body was prepared to do. The whole course went up then immediately down a mountain then immediately back up. The downhills were on wet boulders. I ran out of water. My calf cramped up. On one hill—after I ran out of water and while recovering from a cramped calf—I had to take three steps and rest, take three steps and rest. I wanted to quit there, but the only way to make it end was to make it back to my car.

So at the 2nd aid station, I followed the signs for the 17-mile drop-out. Only four miles to go. In about 3.5 more miles, I heard voices and thought I must be nearly finished…until I realized I had come back around to the same aid station I had just left! Disheartening. A friend at the aid station said if I just followed the road, I'd be back to the starting point. How far? I asked. Not far, she said. Only about three or four more miles. So. What else could I do? I followed the road, eventually saw where I made the wrong turn, found where to make the correct turn, finished the race on the trail, and logged about 20.7 miles total. I didn't cry this time. There was some amazing food at the end and some awesome people to talk to and re-live the horrors of the trail. But, again, I was left with that feeling like, "I don't want to do this again." 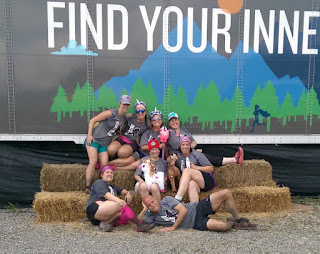 The week after that was Ragnar—an experience worth it's own blog post, but in summary it was a two-day, three nights camping, relay trail race in WV. Each relay team member runs three times to cover each of the course's three loops of varying terrains and distances equaling about 15 miles total per person. I loved camping. I loved the shorter distances. I even loved when the extreme storms and rain delays caused us to "triple up" our loops and I got to run two of my three loops with teammates. That was fun. I didn't go race-pace fast, but I got to go fast enough that it was challenging and enjoyable. My body was better prepped for those shorter distances, in this case between 3.5 and 6.7 miles. It renewed my love of and faith in trail running.

Moral of the story is that I need to better prepare if I plan to race longer distances or stick with the shorter distances! I don't have any more trail races planned, but I'll be on the look out for 5K or 10K races.
Posted by Anne Greenawalt at 10:15 AM