Going into the 2019 championship season, I didn't know what to expect from my performance. I had more challenges this year that affected my training and my perceptions of my training.

It started off well: I got to train at the Olympic Training Center for a weekend with the 2020 men's Olympic swimming coach and several former and prospective Olympic swimmers as coaches. I loved the experience and got some great stroke technique tips, like lowering my head position. So that's what I worked on for months afterwards: keeping my head down while swimming freestyle. 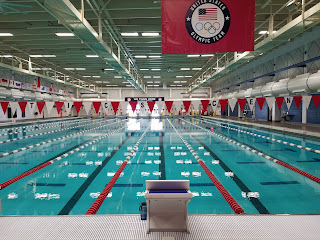 But it didn't seem to make a difference. I still had neck pain. I didn't see improvement in my times and actually felt slower. It frustrated me. I felt like I was ruining my stroke. I wanted to give up on trying to lower my head and go back to my original, higher head position that felt more comfortable because I was used to it.

Shortly after the training camp, my boyfriend of several years and I broke up, which resulted in me moving to a new home in a different town. Overall the move was positive, but it was stressful and emotional. It also moved me away from the beautiful, fast competition pool where I had been training and always had my own lane, and it put me back at the West Shore Y, which is where I grew up swimming but it's shallow and often dirty and crowded. It also moved me away from Gruver Fitness Outdoor Bootcamp, which helped me to lose fat and gain muscle and had also given me a sense of community when I otherwise felt isolated.

I also started a new job after I moved, which was not exactly in my area of expertise, but I needed a new job quickly because my spring college classes were dropped due to low enrollment. The new job is more stressful, more hours, and late hours. It's mostly second shift—till midnight—but I am a morning person. So it causes me to lose a lot of sleep. I typically need a solid 7 to 8 hours of sleep to feel fully functional. I only get 4 to 6 with the new job. I thought my body would adjust, but four months in and I haven't adjusted yet.

My swimming training has felt lackluster all season. I wasn't motivated to go to the pool. In the past when I felt like that, I'd feel better once I got to the pool and I’d have great workouts. Not so much this season. For months I was forcing myself to go to the pool three or four times a week, each time hoping something would click to bring back my motivation, but it rarely happened. Maybe once a month I'd do a set that would give me that spark again.

But I persevered. I kept showing up. Again and again. 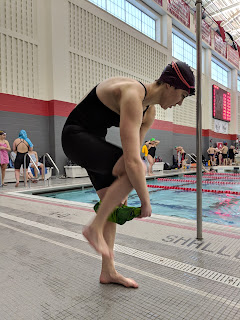 A few weeks before the championship season, something with my head position clicked: I realized what I was doing wrong and why it still felt so slow and awkward. So I did a lot of drills to fix it and slowly, slowly I started to improve.

There's not much I can do about swimming at the crowded Y, but I found my rhythm there and mostly found times I could usually have my own lane. I still miss the outdoor bootcamp, but I found the Chaka Fit classes at Chaka CrossFit which have helped me to continue to build strength and community.

My poor work duties and schedule gave me extra motivation to finally finish my doctorate, and I successfully defended my dissertation in February! (Yes, I am a doctor of education now!) With that degree, doors for new career opportunities have opened, which has relieved some stress.

Having an awesome massage therapist and access to a local float spa were also crucial to recovery during the season.

At my pre-championship meet, I swam well enough: I was the overall female winner in each of my three events, but my times were +/- a half second from the times I swam at the same meet last year. It didn’t give me much indication of what to expect from my goal meet of the year. In fact, I almost decided not to go to my goal meet because I didn’t think the time and energy was worth it if I wasn’t going to swim better than I had last year.

But I did go to the 2019 Colonies Zone Short Course Yards Championship meet at George Mason University in Fairfax, VA which brings in fast swimmers from Maine to Virginia, and here’s what happened: 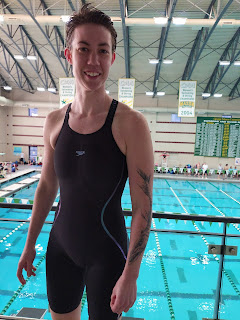 It’s amazing how much work goes into swimming fractions of a second faster, and how exciting it is to see those fractions shaved away from my previous adult best times. It makes the months of practice worth it. I’ve already written out new goal times for next year 😊
Posted by Anne Greenawalt at 3:33 PM