Louise is a highly accomplished swimmer and teacher who is a certified US Masters Level 3 coach and Adult Instructor and American Red Cross certified WSI Water Safety Instructor. A swimming friend told me about one of Louise's open water swimming clinics at Blue Marsh Lake, northwest of Reading in Pennsylvania, which was where I first met Louise. Her love for swimming and her swimmers was palpable! Even as an experienced pool swimmer, I learned much from her advice and instruction on open water swimming during the clinic. I followed her on facebook and it has been a pleasure seeing her expand and enjoy her swimming career and swim coaching business. Below is an excerpt from an interview with Louise in her own words about her journey to becoming an athlete and coach.

One of the things that I did, or had been doing, was going to the pool at Elizabethtown College on my lunch hour. I would go and jump in and it was kind of my de-stress. Up until then I was by no means an athlete. I didn’t have any set goals. I wasn’t sedentary, but I was trying to be active, you know, be healthy, but I didn’t have the mindset that I needed to do this to be healthy. When I started swimming at the pool, it was really for me to have time to myself. It wasn’t an athletic pursuit. So, I had been swimming at my lunch hour and then I started going to Curves, which was that little circular exercise thing, and again it was to try to help me stay healthy because I was gaining a lot of weight, mostly because of stress: I was turning 50, I was perimenopausal, I was having migraines every month, I was just a mess.

I didn’t have any goals, I was just trying to stay above water. But then I got bored. I am easily bored, and Curves was driving me crazy because we’d just literally go around in a circle. The women there were lovely women but they just didn’t seem to mesh with who I was, you know? They’d talk about recipes and retirement, and I didn’t feel like that was me. I didn’t connect with them. So then, right around that time, a gym opened up in Elizabethtown and I said to my husband, I’m really bored, maybe we should go to this gym. So then I’m still doing the swimming at my lunch, and then we joined this gym, and that’s where I learned to walk on a treadmill. I had never even walked on a treadmill in my life.

In 2008, a friend of mine who was a Pilates instructor, was starting to do more running, and she said to me, "Do a half marathon." At that time, I didn’t even know what a half marathon was. I said to my husband, maybe I can do a half marathon and he said absolutely! I didn’t even know what a 5K was. I asked him will you help me – yes I will help you – so I started running on this treadmill. I had never done a 5K. I went right from this treadmill to a half marathon. My first half marathon was the Hershey Half Marathon and I made it to mile 12 and I couldn’t go any farther. I was in such pain and I felt like an utter failure. That was my first athletic pursuit, it was as a running thing. After that I went home and I was so depressed and sad, I thought I’m just this 50-year-old woman, I have all of these problems, I can’t even run a half marathon, but I decided to give it one more go. I was able to successfully complete the Philadelphia Half Marathon two months later and I was hooked.

So then I was doing swimming at lunch and I started doing this running. And it was when I started to get into the running and half marathons that I started to think of myself as an athlete. But what really solidified it was when the same friend who told me I could run a half marathon told me, “You can swim around the Statue of Liberty. I know you swim at your lunch hour.” So, I decided to learn what it takes to swim around the Statue of Liberty. That was my very first open water swim and that’s what got me hooked on open water swimming. And I think because the half marathons – I started doing that just as that craze kind of hit and more and more people were doing running so it wasn’t quite novel a thing. But when I started doing the open water swimming I had more and more women my age coming up to me and saying, after the Statue of Liberty, “How did you do that?” And I think it was the feedback that I was getting from other women who looked like me and had the same life experiences as me – because I don’t look like an athlete.

Them coming up to me, looking at me as an athlete, made me feel like an athlete. A lot of people do running and half marathons but it was that open water event that solidified in my mind that maybe I was doing something just a little bit beyond what I had imagined I could do. And I think that’s what triggered, “Hey, I think I’m an athlete.” It was when people started coming back to me, it wasn’t so much, it was like these women that I so resonated with their stories, trying to work full time, juggle all these things, I’m sad, I’m depressed, nobody takes me seriously kind of thoughts. I took them seriously. If I can do this, you can do this, and that’s when, as I started working with and coaching and spending time with women and then men, it solidified the fact that I think I am an athlete. 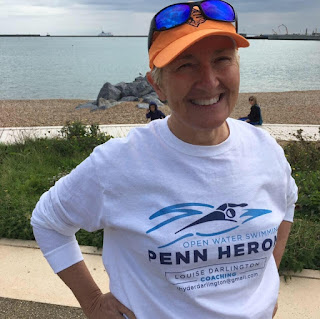 And from the ice swimming is where I started the Penn Heron Open Water Club because I really wanted to be all inclusive. It was so wonderful to see people show up at our open water events who wouldn’t go to other events, or try on a wetsuit, or put on a swim suit, because they didn’t feel like they looked like an athlete. Our club is all inclusive. You don’t have to have a wetsuit. You can swim in a wetsuit or in a swim suit, I don’t care, you can be 60 or 20, you can be 300 pounds or 80 pounds, you can be black, white, whatever color. I just want people to feel that if you step foot in the water, you make that step, then you’re an athlete. Because it’s eye opening when you start to say I’m an athlete, it starts to open up a whole world of possibilities. I love when I hear people say, yeah, I’m really an athlete.

If you're interested in having a swimming coach, check out Lousie Darlington's coaching page.

Stay tuned for more from Louise on ice swimming, marathon swimming, and the swimming community.

Questions for Louise about her sports or coaching career? Please comment below!

This interview is part of the Thigh Flasher Athletes Who Inspire Me Interview Series. Contact me if you’d like to share your story as a sportswoman or nominate another sportswoman who has inspired you to get fit, compete, and or live a healthier lifestyle.
Posted by Anne Greenawalt at 9:35 AM