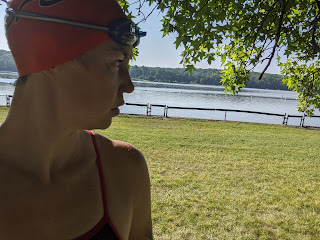 My workouts don't look like they used to pre-pregnancy and, honestly, it takes a lot of positive self-talk to be OK with that. It's not like I ever had the expectation that I was going to jump right back into my routine, be as fast as I was, as strong as I was. I'm just frustrated that I don't have the time or the energy to do what I want to do, and even when I have the time and energy, there is the problem of logistics.

First, if I want to go somewhere to work out, like to the pool for a swim, I need to make sure someone else can take care of the baby for at least an hour, if not two, so I can get to the pool, do an hour workout, shower and change, and drive home.

Second, I need to schedule workouts around breastfeeding or pumping. I need to feed or pump before the workout to avoid soreness and/or leaking. And if I'm gone 2+ hours I have to feed or pump when I get home, or soon after. And forget doing anything like a long hike or trail run that would take more than three hours.

And that's just the logistics of breastfeeding/pumping and doesn't take into consideration the toll it takes on my energy and hydration. Something that has been most surprising for me is how thirsty I get. Immediately after that first tug, I feel dehydrated like I ran a marathon in a desert with no water. It also takes an extra 300 to 500 calories to keep up the milk supply because it takes so much energy to make it.

I read an article or listened to a podcast on athletes who are mothers, and at least one athlete -- and I want to say it was Allyson Felix, six-time Olympic gold medalist, 11-time world champion who broke Usain Bolt's record for the most world championship titles ever by earning her 12th gold at 10 months postpartum -- said she hires a nanny to bring her kids to her workouts so she can breastfeed between sets. It is awesome that she has that available to her and that she's able and willing to make that commitment with her time and body. But those of us not training for Olympic medals and world titles, we workout and compete just for the love of it, and we do it on top of other full-time careers, family, and other commitments. 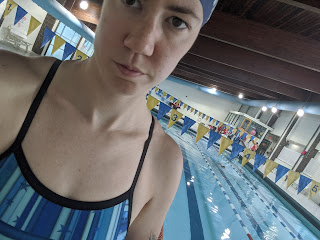 Ok, so let's say I do get someone to take care of the baby for a few hours, I time nursing and pumping appropriately, and I'm fully fed and hydrated. So far, that only happens twice per week, on Saturday and Sunday, if I'm lucky. I've become a weekend warrior. I don't like that term because it insinuates a less serious athlete, one who prioritizes other things during the week. But I guess that describes me right now, so I'm trying to embrace it and be thankful I'm still at least a weekend warrior.

Anyway, during my weekend warrior workouts, I get to a point near the end of an hour-long swim or boot camp that I get tired. Exhausted. My back hurts. My shoulders are sore. I'm overheated. And that is when the serious athlete in me has a conversation with the weekend warrior I've become.


And so the weekend warrior keeps winning.
Any other weekend warriors out there? Any other athletes who are or were breastfeeding while training?
Posted by Anne Greenawalt at 9:01 PM