Cover Reveal! Out Front the Following Sea: A Novel by Leah Angstman

I virtually "met" Leah Angstman during the March 2021 SMOL Fair virtual book fair when she hooked me up with awesome deals on exciting books from her press, Alternating Current Press. She clearly cares deeply about the authors works with and independent press publishing in general, and I have learned so much more about small presses by following her and Alternating Current Press on Twitter.
I’m thrilled to be participating in the cover reveal for Leah Angstman’s debut novel, OUT FRONT THE FOLLOWING SEA, coming January 2022 from Regal House Publishing.

OUT FRONT THE FOLLOWING SEA:
A Novel of King William’s War in 17th-Century New England
BY LEAH ANGSTMAN

**Shortlisted for the Chaucer Book Award**

OUT FRONT THE FOLLOWING SEA is a historical epic of one woman’s survival in a time when the wilderness is still wild, heresy is publicly punishable, and being independent is worse than scorned—it is a death sentence.

At the onset of King William’s War between French and English settlers in 1689 New England, Ruth Miner is accused of witchcraft for the murder of her parents and must flee the brutality of her town. She stows away on the ship of the only other person who knows her innocence: an audacious sailor — Owen — bound to her by years of attraction, friendship, and shared secrets. But when Owen’s French ancestry finds him at odds with a violent English commander, the turmoil becomes life-or-death for the sailor, the headstrong Ruth, and the cast of Quakers, Pequot Indians, soldiers, highwaymen, and townsfolk dragged into the fray. Now Ruth must choose between sending Owen to the gallows or keeping her own neck from the noose. “With OUT FRONT THE FOLLOWING SEA, Leah Angstman reveals herself as a brave new voice in historical fiction. With staggering authenticity, Angstman gives us a story of America before it was America — an era rife with witch hunts and colonial intrigue and New World battles all but forgotten in our history books and popular culture. This is historical fiction that speaks to the present, recalling the bold spirits and cultural upheavals of a nation yet to be born.”
—Taylor Brown, author of PRIDE OF EDEN, GODS OF HOWL MOUNTAIN, and THE RIVER OF KINGS

“Steeped in lush prose, authentic period detail, and edge-of-your-seat action, OUT FRONT THE FOLLOWING SEA is a rollicking good read. Leah Angstman keeps the story moving at a breathtaking pace, and she knows more 17th-century seafaring language and items of everyday use than you can shake a stick at. The result is a compelling work of romance, adventure, and historical illumination that pulls the reader straight in.”
—Rilla Askew, author of FIRE IN BEULAH, THE MERCY SEAT, and KIND OF KIN

“Lapidary in its research and lively in its voice, OUT FRONT THE FOLLOWING SEA by Leah Angstman is a rollicking story, racing along with wind in its sails. Though her tale unfolds hundreds of years in America’s past, Ruth Miner is the kind of high-spirited heroine whose high adventures haul you in and hold you fast.”
—Kathleen Rooney, author of LILLIAN BOXFISH TAKES A WALK and CHER AMI AND MAJOR WHITTLESEY

“Leah Angstman has written the historical novel that I didn’t know I needed to read. OUT FRONT THE FOLLOWING SEA is set in an oft-forgotten time in the brutal wilds of pre-America that is so vividly and authentically drawn, with characters that are so alive and relevant, and a narrative so masterfully paced and plotted, that Angstman has performed the miracle of layering the tumultuous past over our troubled present to gift us a sparkling new reality.”
—Kevin Catalano, author of WHERE THE SUN SHINES OUT and DELETED SCENES AND OTHER STORIES

“OUT FRONT THE FOLLOWING SEA is a fascinating book, the kind of historical novel that evokes its time and place so vividly that the effect is just shy of hallucinogenic. I enjoyed it immensely.”
—Scott Phillips, author of THE ICE HARVEST, THE WALKAWAY, COTTONWOOD, and HOP ALLEY

“OUT FRONT THE FOLLOWING SEA is a meticulously researched novel that mixes history, love story, and suspense. Watching Angstman’s willful protagonist, Ruth Miner, openly challenge the brutal world of 17th-century New England, with its limiting ideas about gender, race, and science, was a delight.”
—Aline Ohanesian, author of ORHAN’S INHERITANCE

“Leah Angstman is a gifted storyteller with a poet’s sense of both beauty and darkness, and her stunning historical novel, OUT FRONT THE FOLLOWING SEA, establishes her as one of the most exciting young novelists in the country. Angstman plunges the reader into a brilliantly realized historical milieu peopled by characters real enough to touch. And in Ruth Miner, we are introduced to one of the most compelling protagonists in contemporary literature, a penetratingly intelligent, headstrong woman who is trying to survive on her wits alone in a Colonial America that you won’t find in the history books. A compulsive, vivid read that will change the way you look at the origins of our country, Leah Angstman’s OUT FRONT THE FOLLOWING SEA announces the arrival of a preternatural talent.”
—Ashley Shelby, author of MURI and SOUTH POLE STATION

“Rich, lyrical, and atmospheric, with a poet’s hand and a historian’s attention to detail. In OUT FRONT THE FOLLOWING SEA, Leah Angstman creates an immersive world for readers to get lost in and a fascinating story to propel them through it. A thoroughly engaging and compelling tale.”
—Steph Post, author of HOLDING SMOKE, MIRACULUM, and WALK IN THE FIRE

“It’s a rare story that makes you thankful for having read and experienced it. It’s rarer still for a story to evoke so wholly, so powerfully, another place and time as to make you thankful for the gifts that exist around you, which you take for granted. OUT FRONT THE FOLLOWING SEA is a book rich with misery, yet its characters are indefatigable; they yearn, despite their troubles, for victories personal and societal. Leah Angstman’s eye is keen, and her ability to transport you into America’s beginnings is powerful. With the raw ingredients of history, she creates a story both dashing and pensive, robust yet believable. From an unforgiving time, Angstman draws out a tale of all things inhuman, but one that reminds us of that which is best in all of us.”
—Eric Shonkwiler, author of ABOVE ALL MEN and 8TH STREET POWER AND LIGHT 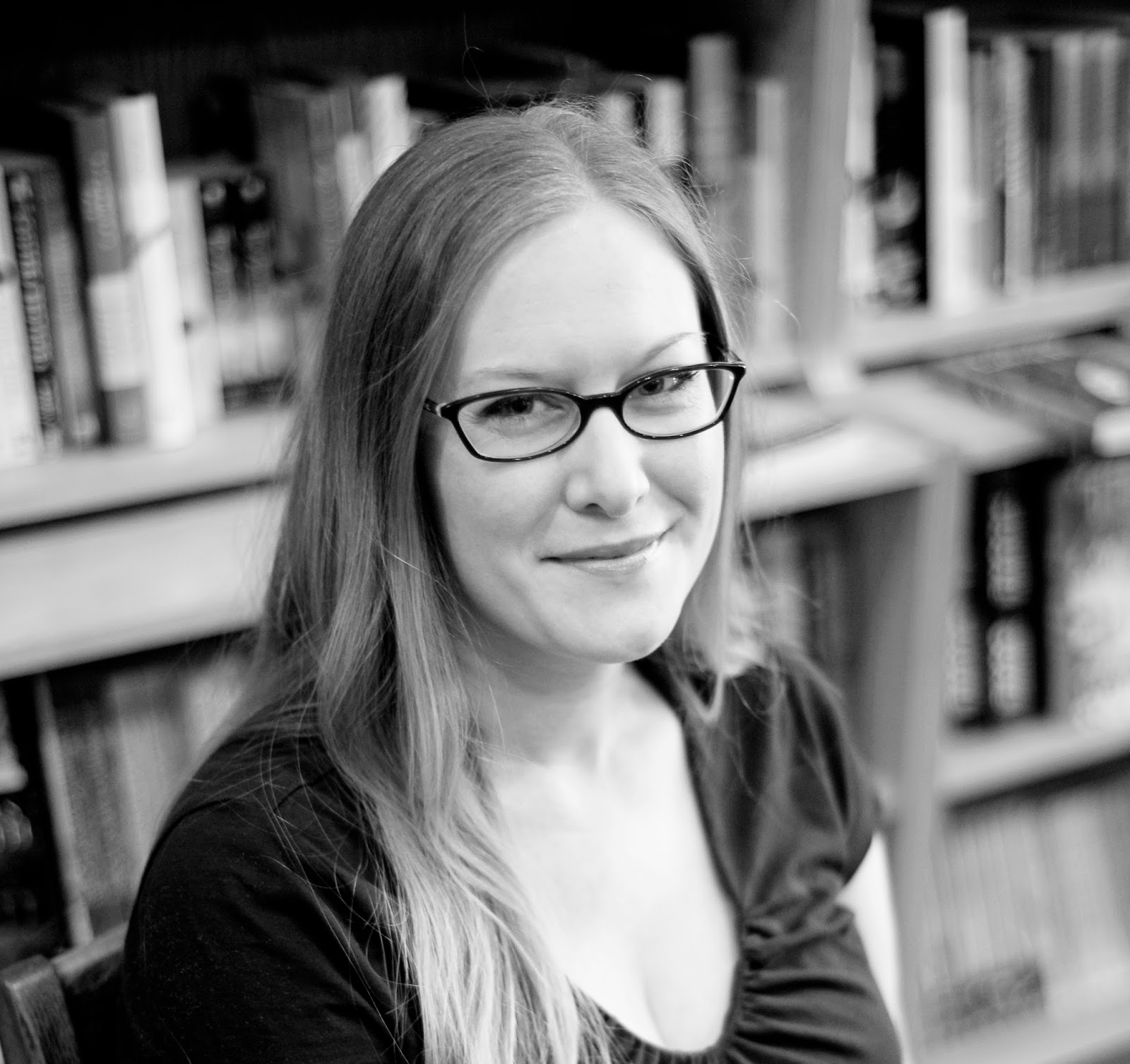 Leah Angstman is a historian and transplanted Michigander living in Boulder. OUT FRONT THE FOLLOWING SEA, her debut novel of King William’s War in 17th-century New England, is forthcoming from Regal House in January 2022. Her writing has been a finalist for the Saluda River Prize, Cowles Book Prize, Able Muse Book Award, Bevel Summers Fiction Prize, and Chaucer Book Award, and has appeared in Publishers Weekly, L.A. Review of Books, Nashville Review, Slice, and elsewhere. She serves as editor-in-chief for Alternating Current and The Coil magazine and copyeditor for Underscore News, which has included editing partnerships with ProPublica. She is an appointed vice chair of a Colorado historical commission and liaison to a Colorado historic preservation committee.


a Rafflecopter giveaway
Posted by Anne Greenawalt at 3:00 AM